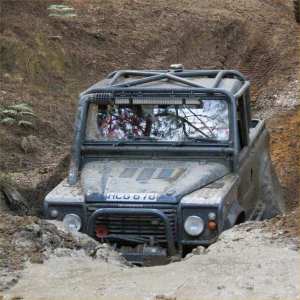 It was by any standard a 'Barking Mad as a Mad thing' Engine, wildly-wild camshaft, huge ported heads, Omega Pistons with massive valve cut outs, Bleed Down Lifters, and a whole host of other lovely tuning bits, which made for a fabulously powerful race engine.

It also ran one of the most horrible EFI systems know to man 'BLs (in)famous Flapper', but not just a Standard Flapper, oh no, it was in such as state of tune that it had XJ6 Injectors, and a Massive Jag AFM, and a ECU with a Knob on the side for Extra Fueling, gawd it burnt fuel for England with it at '000' let alone '486' which was the 'Full Race' Setting.

To say this engine was 'Fussy' would be a huge understatement, it was horrendous. It would flood on start up if it wasn't caught just right, great when you have just stalled in Guildford High Street, it didn't like 'Ticking Over' the wild camshaft gave it 'Valve Overlap' so you choked to death whilst it spluttered and then died, refusing to start as it had flooded again, normally in the most embarrassing of places.

BUT, when it was 'On Song' it was a huge grin factor, between petrol stations and praying no heavy traffic that is. And this was in my Road Legal Challenge 4x4 Land Rover 90, so added to the 'run like a dog under 3000 RPM factor', was the added problem of V8s hating water. I tried everything, from pervy rubber gloves with 8 fingers, to silicone grease, vented tubes in and out of the Dizzy cap, Lemonade bottles zippy tied over the cap, RF SAS V8 110 Suppression Kit and at one point everything all at once, splash proof Mmmm 'OK' on a good day, but mainly just hopeless in varying degrees of waste of time. 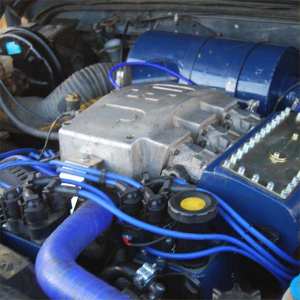 And so it was I heard about Megasquirt.

I read read and read, it promised so much, and it sounded so great, and in was in June after another day of sheer fun of either dying or not starting (again) or both and a waste of an entry fee that I decided enough was enough. If Megasquirt was half as good as I had read it had to be worth a go. In fairness by now if someone had suggested wearing Lycra, holding a chicken at midnight and chanting Klingon would have sorted it I would have tried that too

So Megasquirt time it was, and cutting a long story short (see the link for the full story) I had a 4.5 Converted to Hotwire Injection, no Lucas ECU no BL Jag Injectors, and No Dizzy. Result ? 'Pleased' doesn't come even close, although at the time I was doing stuff that nobody could help me with (like loading the ECU with settings etc) it ran, it ran quite well, then I learnt all about tuning it.

What amazed me was not only just how easy it was but the difference.

I had a MONSTER of an engine no longer reliant on the "Clock Work Spark Generator" (Known as a Distributor) that went better than ever before, used less fuel, started on demand rather than prayer, and went like the proverbial. I was sold. I then bored the living daylights out of whoever would listen, eyes glazed over, friends hid, but I was happy, ecstatic, I had cracked the tuning, starting, running and had a engine with more power than ever before, and waterproof, the Land Rover turned into submarines at events, and people started to ask me. 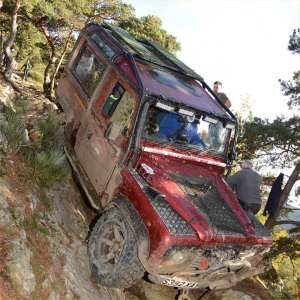 At the time I had a proper Job, when I left due to massive health issues I was nagged by many to do what I had done to my V8 for them, and that's how it all started.

We are now in our 7th Year, and with the kind support of Bruce Bowling and the many in the Megasquirt Community we now have a small company doing Megasquirt and other Off Road toys like Rebuilding, Building and Modifying Differential (www.xcess4x4.com) but Megasquirt goes from strength to strength.

We love what we do, everyday. Customer service is everything to us, if you buy from us and you are happy, then tell your friends, and if you are not happy then tell us, we will always try to do the right thing for you.

Again, a huge thanks must go to Bruce Bowling, not just for the design and development of Megasquirt as a system but also his agreement in the use of the name in this site. Without him, and the many gurus on www.msefi.com neither would I have this site, nor would my engine be as good as it is

As a Admin of www.lr4x4.com, and whilst this venture is neither supported by, nor involving the forum in any way, there are a number of Guys on LR4x4 who run, and 'live eat sleep and breathe' Megasquirt, worth a read.... and help is also there. Here is the Original Build Thread this thread on www.lr4x4.com

And finally a severe warning, Megasquirt is highly contagious, once you've started you'll find yourself saying things like "I can improve on that", or "I think I can tweak that a bit" whilst others will look on in amazement and say "Why, it seems fine ?".


You have been warned !